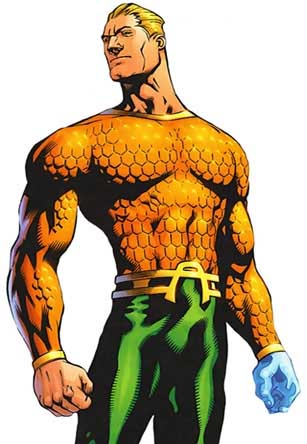 Other Names: Orin; Orin the Second

re: "Just out of curiosity, is there any major character in the DC Universe definitely shown as being Jewish?"

For that matter, what characters have been portrayed as having any definite religion?

...Some others are, I would guess not followers of any religion found on our Earth. I'm thinking of any alien who came here after childhood like J'onn J'onzz, the pre-Crisis Hawkman, Starfire, etc. This also would apply to Aquaman depending on what his current continuity says about when he left Atlantis.

From: "Religious Themes in Comics" forum discussion, started 21 May 2003 on the Sketchy Origins website (http://www.sketchyorigins.com/comics/archive/index.php?t-1380.html; viewed 12 May 2006):

I was reading about Alex Ross in Wizard 141 last night and he said that he liked the DC characters so much because each one was like a "god" of his realm. Aquaman of the water, Batman of Gotham, Superman of Metropolis, J'Onn J'Onzz of Mars. Each one has the ultimate power in their given sphere of influence. So, he equated it to like the best of the best.

Well, I bring this up here not only because he mentions that they are gods, but also because it seems to me that they are often set up as saviors as well. Batman is to rid Gotham of crime. Superman protects humanity. Aquaman protects the oceans. J'Onn J'Onzz is the last of his kind from Mars and is supposed to save his civilization. These are all Christ-like attributes.

This doesn't just go for DC characters, but I only mention them because that's what Alex Ross talked about in the article. As I said earlier in this thread, I think that this "christian" influence on the character development and story creation could be more a reflection of that influence in our society and our popular mythos, more so than a direct allusion.

These are archetypes that we are looking at here. That's why we recognize similar traits among them.

Don't the Atlanteans still venerate the Greek gods in DC? I've gotten that impression anyway. (Aquaman didn't seem to have any problem interacting with the Greek gods)...

So... out of curiousity are there vegetarian superheroes? I'm not talking about supporting characters, but the actual heroes who wear tights and a cape. And are any of them vegan?

The Brave and the Bold