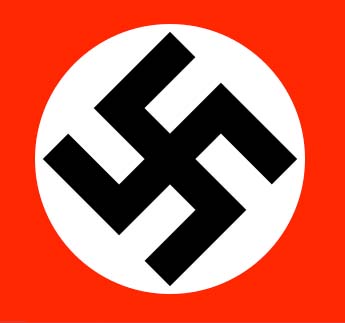 The Religious Affiliation of
Nazis

It is probably impossible to accurately determine the "number of appearances" that generic Nazis have had in comic books, films, televisions, and other popular media. Since World War II, Nazis have emerged as one of the most commonly used staple villains in fiction. The number of stories featuring generic Nazis (almost always as villains) certainly exceeds the number of appearances of any specific named character.

Checking IMDb.com on 11 January 2010, we found 64 listings for films, TV movies and TV series which included the word "Nazi" in the title itself. The word "Nazi" was associated as a keyword with 1243 separate film/TV movie/TV episode listings. That count doesn't even take into consideration 3791 film/TV movie/etc. entries associated with 85 other keywords (or "keyword phrases", really) which include the word "Nazi" - keyword phrases such as "Nazi Germany", "Nazi occupation", "neo-Nazi", "Nazi soldier," etc. Do all of these 3791 films include generic Nazis as characters? No, but it is a good bet that the majority of them do. None of this even takes into account the many film entries in the Internet Movie Database which feature Nazis but which are as-yet unannotated in their keyword field, or films which feature Nazis but not significantly enough for "Nazi" (or some variation thereof) to have been added as a keyword.

For now we have used the number obtained by counting Nazi variation keywords in our IMDb.com search as an estimate for "number of films and TV episodes which feature generic Nazi characters." We realize some individual titles may have been counted twice, but even with that consideration, this is certainly a "lower bounds limit," and the "real" number is doubtless much higher.

In "Castle with Wall-to-Wall Danger!" in Detective Comics #329 (July 1964), Walter Maunch tells Batman about how he and his cousin came to be at an old English castle (pages 13-14): "Years ago a band of Nazis, fleeing Germany toward the end of World War II, flew here to England -- carrying with them a fortune in gold from their treasury! The fugitives were soon captured, but the gold was never found! I started a search for the lost treasure a decade ago! Gradually the trail led me here to this castle! I managed to raise funds and buy it -- in order to continue my search!"

On the last page of this story (page 15) Batman and Robin are at home weeks later when they read in the newspaper that Maunch has discovered the gold. The headline reads: "Treasure Comes to Light in England! Nazi gold long buried found!"

Maunch showed his gratitude for how Batman and Robin had helped him by donating $50,000 of the money he earned from the gold to the favorite charity of the dynamic duo.

World War II-era Nazis were seen in a flashback in Batman and the Outsiders #2 (Sep. 1983) in a story relating to the history of Moravia, native country of Outsiders member Geo-Force.

Nazis were mentioned (as Hitler's "S.S. Elite") in "Zero Hour for Earth!" in Batman #167 (Nov. 1964). Talking to Robin, Batman compares Nazis to a group formed by the villain Karabi (panels 3 through 6 on page 13): "Each scrap of information I've collected means nothing by itself -- but together they add up to Karabi's insane plan for world power! Karabi intends to secretly fire a nuclear missile from country A [actual name not revealed for security reasons] to country B! He knows B will accuse A of aggression -- and war will break out . . . The eruption of war will only be the beginning! Like a chain reaction, it will inevitably spread, involving more countries, nations . . . even the United States1 Then Karabi intends to form a group of malcontents that will form the nucleus of a band like Hitler's S.S. Elite -- and with them, will try to seize as much power as he can!"

Details from now-defunct webpage at http://marvel.com/universe/Nazi_Party:

Base of Operations: Mobile, formerly Germany

The National Socialist German Workers Party, or "Nazi" Party, was founded as a small right-wing political party in 1919 by Anton Drexler. By 1933 the party was voted into power led by Chancellor Adolf Hitler. Hitler became dictator of Germany the following year, declaring the beginning of a new period in German history known as the "Third Reich" and began a rearmament campaign with the aim of conquering Europe, a goal which eventually precipitated the Second World War. Germany eventually lost World War II and Hitler was killed by the Human Torch. However, through several evil agents, the Nazi movement has continued on with terrorism throughout the world to this very day. Most notably are: the Red Skull, Warrior Woman, Baron Heinrich Zemo, Baron Strucker, Baron Blood and countless others. While officially disbanded after World War II, the Nazi Party, through both direct action and inspiration, continues to affect events wherever it may strike. The terrorist group Axis Mundi is probably the most prominent direct offshoot of the Nazi Party still operating.

Number of group members listed below: 4

BELOW: Defense Department official Ozzie Bright (actually a Chitauri spy) compares the current situation to when the Allies broke the Nazis' Enigma code, but did not act on everything they learned from this breakthrough:

"I'll ask you to indulge me in a little historical parallel," Bright went on. "During World War II, hard decisions were made about utilizing certain technologies and acting on the information gained thereby. Had the Allies saved every life and thwarted every minor movement they learned about by cracking the Enigma code, the Nazis would quickly have abandoned Enigma; by sacrificing those necessary lives, the Allies maintained their intelligence superiority over the Nazis long enough for the advantage to prove decisive. Do you understand the analogy, General Fury?"

Adventures of the Outsiders #35 (July 1986): "Sympathy for the Fuhrer" (photo/picture/video)

Midnight Sons Unlimited #9 (May 1995): "The Blazing Skull & the Spearheads of Vengeance"