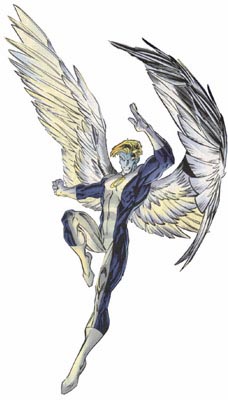 Occupation: chairman of the board, millionaire

The Age of Apocalypse version of this character owned a ritzy establishment named "Heaven." He long attempted to remain neutral in conflict between Apocalypse's forces and the forces of good, but ultimately died fighting against evil.

Nightcrawler is Catholic. Kitty Pryde is Jewish... As for the others, I don't know. Since most are from America or other European countries they're probably at least nominally Christian. Angel, being a good WASP, is probably an Episcopalian. Chamber is probably C of E. [Church of England] Rogue could be anything, maybe Baptist.

Does anybody know the religious beliefs of various characters?

Barring any actual solid evidence in the characters' own books, you could always fall back on the Infinity Crusade and see which sides the characters were on in that conflict. Anybody feel like whipping those issues out and checking these specific characters?

IIRC, even if you read the crossover, it's still pretty vague in what religions the heroes believed.

Jamie Madrox was one of the most religious heroes? Weird. Offhand, I can't remember his character ever saying or doing a single thing involving any particular religion whatsoever. Nor did I think Archangel was really putting the "P" back in WASP.

...I'm surprised to see Warren on that list of most religious.

The problem is that whether they are strongly religious or not.

While some like Nightcrawler, Storm and Sabra are obvious to their beliefs and faith, there are many that I don't think I've ever seen mention their beliefs or gone to church. Angel, Cypher and Havok...

Why are all the cool characters [expletive] Episcopalians? What the hell! Like every hero with a descent power is all rich and beautiful. Look at that list. The Invisible Woman and the Human Torch (multi-millionaires), Warren Worthington - the Archangel (also a multi-millionaire), Captain Britain (millionaire and ruler of another dimension), Psylocke (Captain Britain's sister, so, yes, a millionaire), Henry McCoy - the Beast (not really a millionaire but a genius geneticist who lives in a mansion with Charles Xavier who is a millionaire), Jean Grey - the Phoenix (also not personally rich, but is a cosmic god who, when she's living, lives in a mansion with millionaires), and of course Bruce Wayne - Batman (who is not a millionaire, but is, in fact, a billionaire). So, yes. There's you're proof. All Episcopalians are lazy rich people.

I'm Episcopalian myself, so I remember whenever a hero comes up as one. From what I remember, Beast, Jean Grey..., Archangel, [and] Psylocke were all at some point identified as Episcopal.

Most comic book characters are blandly nondenominational with a tendency towards being WASPs [i.e., "White Anglo-Saxon Protestants"]. The only ones I would consider obviously practicing members of a faith are:

...Since [Psylocke] and Archangel once went to church together, I'm guessing [she isn't an atheist]...

re: Since she and Archangel once went to church together...

I'm sure Angel dragged her there. She was out of her gourd during that time anyway.