BELOW: Tony mistakenly thinks Thor is quoting eddas (the primary source of Norse mythology, sometimes thought of as Norse/Teutonic scripture):

Thor took a deep breath, letting the smells of the land and the battle flood through him. As he exhaled, he said, "Here amid icebergs rule I the nations."

Thor shot him a grin. "No, that's Longfellow. He was a big fan of mine. Gotcha."

And then he raised Mjolnir and leapt down again, blood singing with the battle to come.

BELOW: Nick Fury knows that many important people in Washington, D.C. think of Tony Stark as an "alcoholic libertine":

Some of the agency types he was going to meet today were gung-ho about Tony's gizmo; some weren't; some were just professing outrage that an alcoholic libertine like Tony Stark had gotten hold of Chitauri tissue.

BELOW: Homeland Security official Vince Altobelli refers to Tony Stark as a "dipsomaniac" (someone who drinks alcohol to excess):

Altobelli kept right on talking. "What I want to get on with is the question of how in the hell did Stark Industries, which is run by a for-Chrissake dipsomaniac playboy, get hold of Chitauri tissue?..." 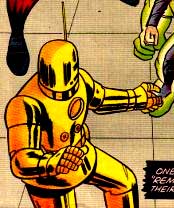 This character is in the following 896 stories which have been indexed by this website: